Whether you’re doing synoptic reporting or NLP-based data capture, at some point you want to capture (semi)structured data. Synoptic reporting is very structure, whereas NLP stands for natural language processing, and usually involves the capturing of more generic and unstructured data. The jury is still out on which one is best, with proponents for each on both sides of the fence.

This article is not about advocating one of the other; but rather an illustration of how PMA.core and PMA.studio can support both.

From a computer point of view, structured data is always easier to deal with, so let’s start there.

Your first move it to define what a form looks like. You can do this by going to the Form Designer in PMA.core:

For several years now, the College of American Pathologists (CAP) has been working diligently in creating standardized reporting forms for various pathologies. These can be downloaded from their website.

You can now go through the exercise of translating a CAP form yourself, or you can try out the import/export function that we built into PMA.core.

If you opt for the latter, you should first download the form definition from our website. Here’s an example for the lung biomarkers form.

Next, click on the “Import” button and point to the XML file that you downloaded earlier.

Whether you went with the manual approach, or the import option, afterwards, your screen should look more or less like this: 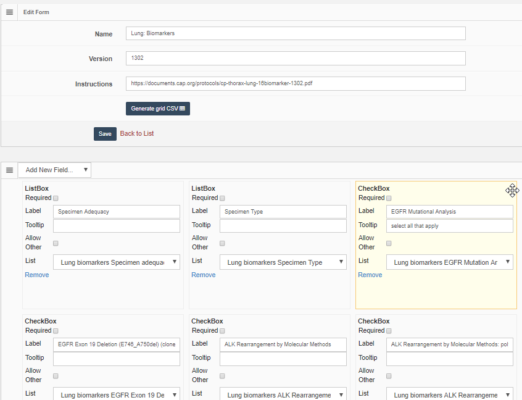 We’ll come back to PMA.core after we discussed how forms and data entry are handled on the PMA.studio side (PMA.view does not support form data).

In order to fill out forms in PMA.studio, you need to enable the panel first. You can do this via the Configuration tab:

Unless you’ve been playing with this before, the new panel should show nothing more but an “Add” button. Click on it, and a popup appears that lets you pick a form template to fill out:

Now the form shows, and we can fill it out as we see fit: 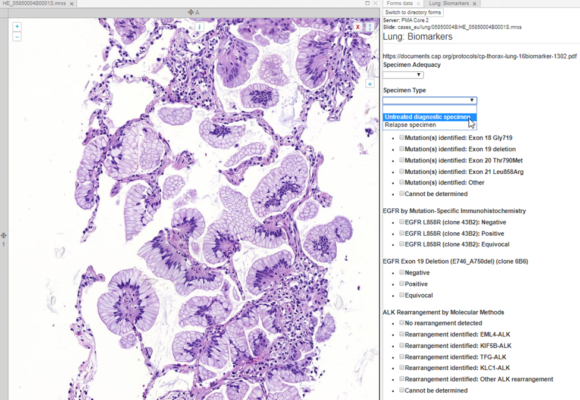 Afterwards, we see the results in the Form data tab, but there’s more you can do.

When you fill out forms for different slides and add them to the virtual tray, the data is automatically integrated in the data grid representation: 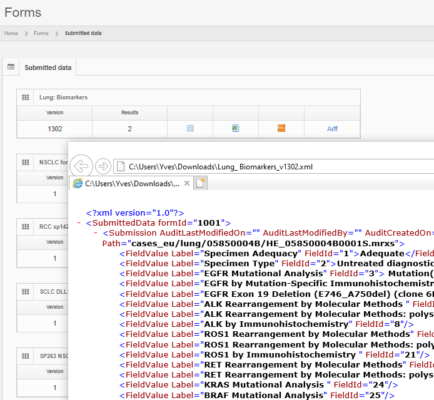 The form data mechanism provided in PMA.core is standard functionality that is used throughout the entire Pathomation software platform. By implementing the engine at the level of PMA.core, we ensure that data captured anywhere is stored with the same rigorous data quality standards, including 21 CFR part 11 compliance.

Where to from here?

After looking at on-slide annotations in our previous episode, today we looked at ways to capture (semi)structured data alongside our slides.

In tomorrow’s edition, we’ll wrap up this tutorial series with miscellaneous tips and trick about the various components in our software platform.