Today we’ll look at PMA.studio, our integrated slide viewing solution. PMA.studio is a beefed version of PMA.vue, which we discussed earlier on in part two of this tutorial series. If you haven’t gone through part two of our tutorial series, we highly recommend you do so first, as everything we tell you about PMA.vue in that one also applies to PMA.studio. Last but not least, to prevent repeating ourselves, we will assume that you already have some familiarity with PMA.vue.

The following diagram illustrates the major differences between PMA.vue and PMA.studio:

There’s a lot to be covered in PMA.studio, so we’re going to take a couple of days to give you a tour of what’s all possible.

When you launch PMA.studio for the first time, the first thing you should notice is that the ribbon now is much better stocked than in PMA.vue.

In PMA.vue, the ribbon only had one tab. In PMA.studio, there are separate dedicated tabs to manage grids, or make annotations. A final tab allows you to configure PMA.studio just the way you prefer it.

Apart from a better stocked ribbon, you should notice that you now not only see you own PMA.core sandbox in the Slide browser, but also a new “cases” instance.

PMA.studio can many multiple PMA.core instances at the same time, and that’s very useful for large and/or geographically dispersed organizations. CellCarta, Pathomation’s parent company, manages US, Chinese and European (PMA.core) assets from within a single (PMA.studio) environment.

Ever wanted to be able to browse your remote slides and local slides simultaneously, without first having to transfer your local slides to the server? With PMA.studio, you can. Go right ahead to the last “Configure” tab and click on the button in the first group that says “PMA.start”. PMA.studio will attempt to find PMA.start running on your system and add it as a separate PMA.core instance to the slide navigator panel.

The following screenshot shows content from PMA.studio as well as PMA.start side by side. The advantage of looking at PMA.start content within PMA.studio is that you can use features like grids and search on your local hard disk. 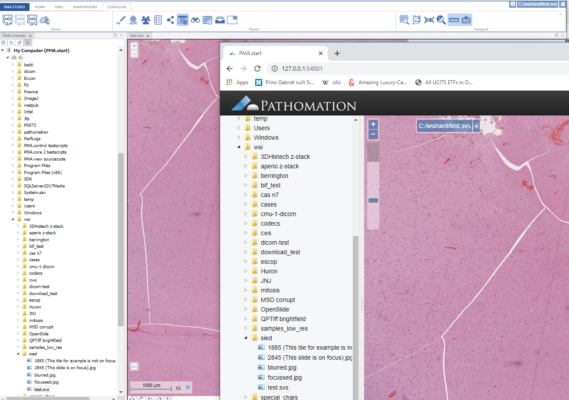 We’ll come back to search later

In PMA.studio, we introduce a virtual slide tray. Just like a physical wooden slide tray, you can use it to organize arbitrary collections of slides.

You can activate the slide tray via the ribbon.

Populating the slide tray can happen through a wide variety of ways. You can add a complete folder of slides to your tray, or you can add individual slides. When you add more than one slide, PMA.studio will ask you if you want to clear out existing content first, or if you want to add on to the already existing group of slides. 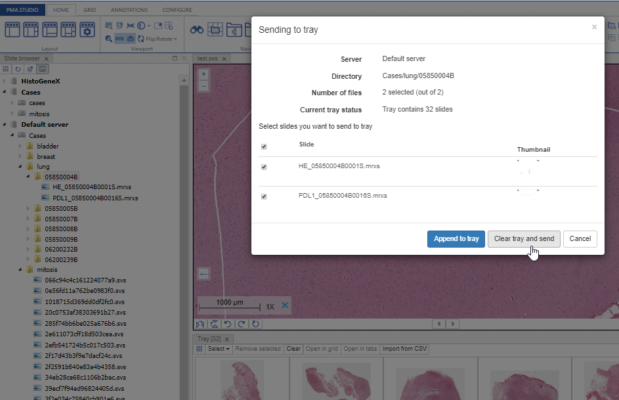 As you add more content to your tray, you may find it more useful to either visualize your group of slides as a list, or as a gallery (the slide browser panel has a similar feature). The first icon in the slide tray’s panel lets you toggle between both:

In our PMA.vue tutorial, we introduced you to grids. You can send slides from your tray to a grid by selecting multiple slides within your tray, and then using the button on the tray’s menu bar to represent these in a grid structure. 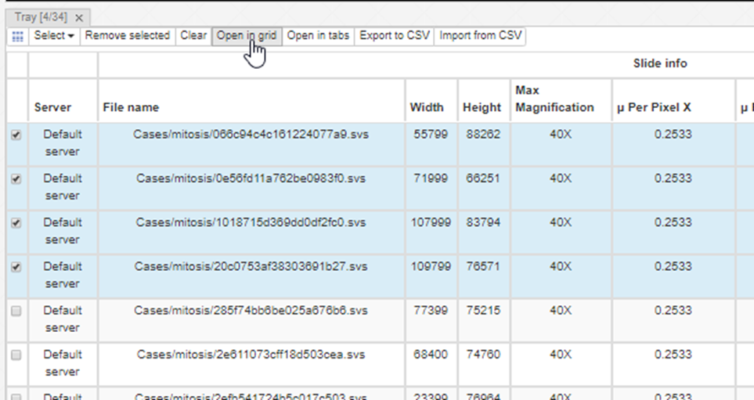 Once you have the grid, you can activate the grid tab on the ribbon to customize the grid, or share it with others. 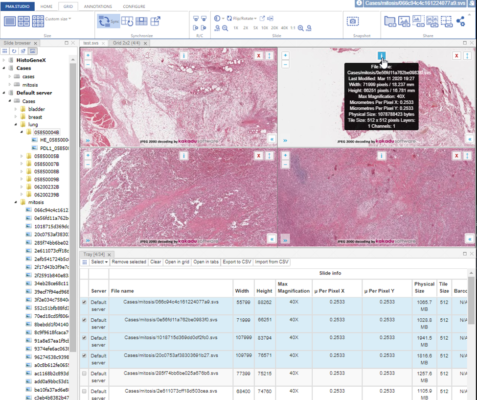 Different shortcuts exist for slide selection, too. You can quickly reset the slide selection to none, all, or invert the current set of selected slides.

Getting information from and persisting your slide tray

When you’re viewing the tray as a listview, you get additional information displayed next to each slide. This can be useful to quickly find slides of a certain (abnormal) magnification, or the quickly identify the fluorescent or z-stacked slides in a folder.

It’s possible for this table to contain more information. We’ll come back to this in a follow-up tutorial.

The final functionality to discuss about the tray is the possibility to persist a tray. You may have already noticed that each time that you log in to PMA.studio, the content of your tray resets. Your tray is not linked to a PMA.core instance either. In fact, you can combine content from different PMA.core instances into a single tray, which can be very powerful.

At the same time; a tray can be a reference set of particular interest to you, and then (re)building it each time you log in can be tedious. Also you can’t keep your tray expanding forever and add to it forever.

The last two buttons in the tray panel bring relief. You can both export and import a tray’s content to the CSV file format. You can use that file then to bring it into Excel for analysis, but you can also use it to store lists of slides in a folder on your hard disk, and then have your pre-selected slides rapidly available for you again any time you want them.

Let’s explore some of the added functionality in PMA.studio. Searching for slides is a common operation you would want to do. By clicking on the icon in the ribbon, you will see a new panel appear. Within that panel, you can initiate any number of searches.

You can search across multiple PMA.core instances, and into a particular folder. The latter is particularly useful for large repositories. Perhaps you have tens of thousands of slides spread across a folder-structure. When looking for slides then, you can limit the search to a particular folder that represents the project you’re currently working on. 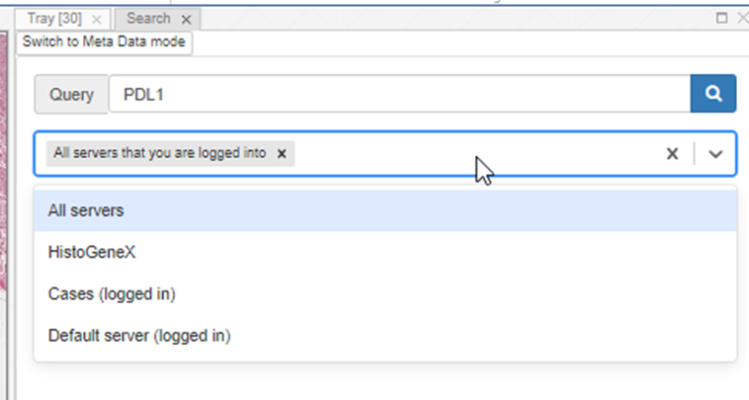 PMA.studio delegates search operations to PMA.core, and returns the result.

You can have multiple search go on simultaneously. The panel shows you which searches are ongoing and which ones have finished. The following shows a search panel with two completed search queries:

When a search is complete, the table shows the number of hits, the original query, and offers a couple of options. You can move your results to the tray, and further examine and visualize them there. You can also export your search results directly, and then use them for populate your tray with later.

Where to from here?

Today we started our exploration of PMA.studio. In particular, we discussed additional features that PMA.studio offers (in addition to supporting all other functions of PMA.vue as well):

In tomorrow’s edition, we’ll go deeper into PMA.studio, and talk about making annotations..